mobiXeyes is a stereo vision system capable of accurately extracting 3D information from camera frames. mobiXeyes was initially developed for measuring ball speeds and tracking the score in open-air Beach Racket games, however the capabilities have expanded to applications including security and surveillance systems, sports training and scoring systems, intelligent transport systems and mobile robotics.

The system design tries to satisfy several diverse requirements, such as portability, low cost, accuracy and robustness (error-tolerant). The solution allows the players to move freely in the court by measuring with high accuracy ball speed regardless the direction of the velocity vector (a problem of the Doppler radar solutions).

The two cameras capture frames at a high rate (at least 130FPS). They are placed opposite to a dark wall that operates as a background facilitating the object (ball) detection process. The cameras operate in a pseudo-synchronized mode. Stereo vision algorithms calculate the exact position of the ball in the 3D space. By knowing two positions of the ball one can calculate the ball velocity vector. A team’s score is analogous to the speed of the ball hits and is calculated given a base speed. Specifically, the final score of a ball hit contributes is computed as follows:

The system components are:

MobiXeyes can be used in official Beach Racket tournaments or in informal matches. It can also be extended so that it supports other sports (e.g., shot put, hammer throw and javelin). The system can be used either as a real-time tool involved in calculating the score, or as a tool for calculating statistics about teams’ and athletes’ performance. The system can be also used indoors, given that there is sufficient ambient lighting. 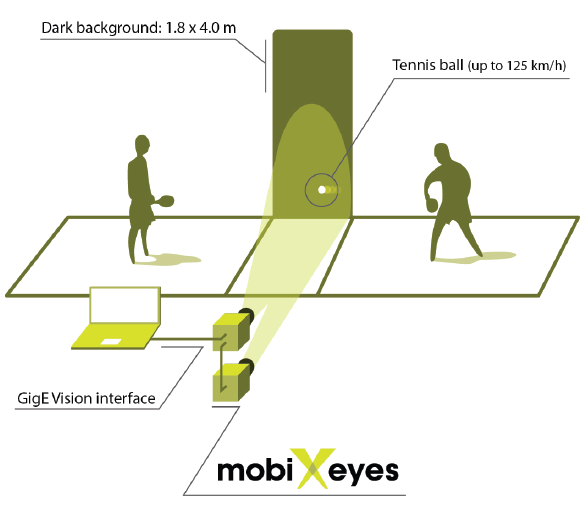 A short presentation can be downloaded here.

The National Documentation Centre featured mobiXeyes in an article under its Research and Innovation section you can find here (in Greek).

A video trailer of the sport